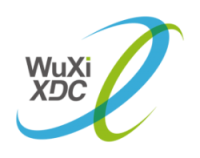 WuXi XDC offers comprehensive and integrated discovery, CMC development and cGMP manufacturing of the payload, linkers and payload-linker chemical intermediates used in the production of Antibody Drug Conjugates (ADCs) and other bioconjugates.

WuXi XDC payload-linker R&D and GMP manufacturing is located in the newly developed area north of Changzhou in the Jiangsu Province of China, approximately 180 km from Shanghai.  Beyond the extensive experience in the discovery, development, analysis and production of small molecules and payload chemical entities, the site also has strong capabilities in technologies such as catalytic hydrogenation, fluid dynamic chemistry, and biocatalysis making it a unique single-source for chemical payload-linker development and synthesis.

With a highly-vetted, and global regulatory agency approved, quality management system and cutting-edge equipment, this site is able to handle OEB-5 materials (OEL~10 ng/m3) ranging from several milligrams to tens of kilograms.  The quality systems at this site satisfy the quality and cGMP standards outlined by the U.S. FDA, EMA and NMPA.

In addition, WuXi XDC provides ready-made (“off-the-shelf”) chemical payloads and linker intermediates many maintaining DMF information and data residing with global regulatory agencies, and thus these molecules are ready for IND filing. Our Library of ready-made compounds (available GMP and non-GMP) include:

We use cookies that are necessary for our website to function properly. We also use cookies to retain user preferences, for analysing our website traffic and for statistical and web-traffic marketing purposes. By clicking “accept all”, you provide your specific and active consent for the use of last-mentioned categories of cookies. To see a list of the cookies and their purpose, click here. Please see section 6 in our Privacy Policy for more information on (i) how we use cookies and (ii) your rights and actions in relation to data protection.
Accept All
Notice:

You are leaving WuXi Biologics Website, after which our Privacy Notice will not apply. Please keep it in mind the protection of your privacy. Are you willing to proceed?

Yes, continue to proceed
No, stay on this Website